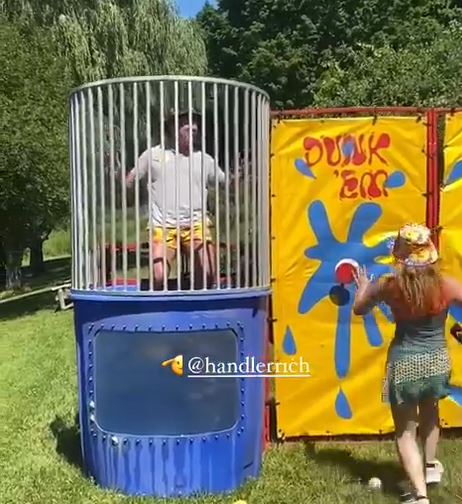 If you weren't feeling a bit over-everything before you read the most recent letter to employees from Jefferies' CEO Richard Handler and president Brian Friedman, you might come away wondering whyever not. "Every single person in our firm is in some type of “yuck induced” funk right now," they write. "Every one of us is fighting each day against the formidable foes of mental and physical exhaustion." And, "people’s concerns are deep, emotional fatigue is real."

The symptoms of this funk seem to be a rush of questions from Jefferies' employees after the last town hall - more questions than at any point in the past two years. The cause seems to be..... well, everything. There's a sense of existential unhappiness: people are "looking for comfort and confidence about the future" but it's a "time of great transition." Jobs have become more challenging and less rewarding. Providing liquidity in trading roles is harder than ever before. In equity and debt capital markets, people are "working harder than ever each day, but much of the payoff is delayed into the future," for when "various markets re-open."  The firm isn't doing well. Jefferies' recent results were "best described only as “reasonable”" (and spending on pay was down by a third, although this is not actually mentioned in the letter).

In light of these difficulties, it's not clear which questions were posed by employees post-town hall, but it seems that quite a few might have been about the layoffs which appear to be galloping towards every bank in the market. Without explicitly acknowledging this, Handler and Friedman hint that they won't be making layoffs if they can avoid it, but nor do they exactly deny that they might make cuts either. "We are not looking for reasons to shrink," they say. And yet: "people who underperform, are not fully committed, have lapses in judgment regarding ethics or who are not constantly reinventing themselves and growing, will always be at risk at Jefferies." Being stuck in a stress-induced funk doesn't sound great for job security.

If Jefferies' employees are feeling bad about the future, the chances are that other bankers are too. Jefferies reports its results before other banks, and we'll know soon whether rivals also experienced a 62% and 63% year-on-year decline in ECM and DCM revenues in the second quarter, and whether their fixed income sales and trading revenues fell by a surprising 37% too.

As it's written partly by the irrepressible Richard Handler, though, the letter to Jefferies' employees isn't entirely gloomy. "Life is ok. Actually, life is pretty darn decent," reflect the CEO and president. Markets also aren't that bad and could be worse. "Do your best every single day until the sun shines brightly again, as it always does," they intone. Funkish employees looking for a role model for this upbeat attitude can refer to the Instagram accounts of Richard Handler or his daughter Skylar. Neither display much sign of exhaustion: in one recent post, Rich Handler is gleefully bouncing on a mini trampoline in an exercise class; in another (shown above), he's standing on a frame above a vat of water and sinks in when a button is pushed. Small pleasures.

Separately, JPMorgan has been on a diversity hiring spree. Financial News spoke to Cecil Peters, head of diversity for the bank in EMEA. In the past year, Peters said the bank has increased its population of black bankers in the UK by 45%, with a 16% increase since January alone. The number of black MDs is up 25%. It's also about bringing in black students at entry-level, said Peters; banks are no longer interested in hiring from top universities -they're interested in "the individual."

Credit Suisse is having trouble onboarding its new wealth clients in Asia and is thinking of hiring some more IT and processing staff as a result. Onboarding is taking up to eight months. Staff are being asked to come back into the office five days a week. (Financial Times)

Now is probably a good time to work for a fund focusing on megatrends such as energy transition, digitalisation and urbanisation. Real assets — real estate, infrastructure and land — are also safe spaces. (Financial Times)

Revolut has enough money to last two years and is “aggressively expanding” in Latin America, India and the Philippines while looking to the Middle East. (Bloomberg)

Dubai is the new place for hedge funds. Millennium Management now has about 30 staff there after securing a license in 2020. ExodusPoint just got a license. BlueCrest is expanding. All Blue Capital left its London office and how has almost half its global staff there. (Bloomberg)

Hedge fund manager-turned property developer Hugh Hendry on losing £80m: “I had leveraged my portfolio, I had borrowed money beyond my means and I was heavily invested in gold. I thought, I’m dead, I’m gone, I’m finished...“I spent two weeks with no investments, just the cash, and then one day I felt better. The world made sense again. I told the traders to buy it all back.” (The Times)

A worker in Chile who was paid £150k for a month’s work instead of the usual £450 first promised to pay it back and then disappeared. (Metro)

The money diary of an indebted 29-year-old senior software engineer in London. "I’ve paid off at least £30k in loans, overdrafts and credit cards over the last seven years." (Refinery 29)

Life is getting harder at Meta, the company that owns Facebook. Employees have been told they will need to work harder with fewer resources and that there will be less hiring, particularly of juniors. “I think some of you might decide that this place isn’t for you, and that self-selection is OK with me. Realistically, there are probably a bunch of people at the company who shouldn’t be here.” (New York Times)