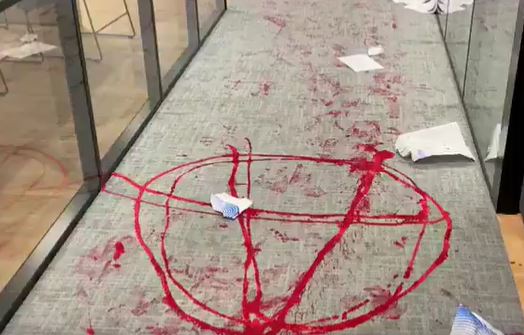 Blackrock's commitment to expanding in Paris always looked a bit flakey. Just over 18 months ago, the world's biggest fund management firm declared its intention of hiring in Paris in a move that was apparently unrelated to Brexit but all about getting closer to its customers. Three months later it clarified that the UK would remain its EU headquarters and it would only be moving "very few" roles to Paris (and the Netherlands) after all.

After events of recent weeks, BlackRock may be wondering whether it wants to be in Paris at all. The Paris problems began in January when protesters against French pension reforms arrived in the fancy entrance hall of BlackRock's Centorial building brandishing flares and chanting slogans against BlackRock's perceived influence on the French government and role in unpopular pension reforms. This was combined with hundreds of thousands of negative tweets against the company from campaigners. And then yesterday the Paris protesters were back, except this time the protests were focused on the climate and the protesters got inside.

Bloomberg reports that Blackrock security were overwhelmed and that protesters entered the building while staff were still there. It's not clear where the staff were: there's no one around in the various photos and videos posted online of the intrusion (including the one below of protesters throwing all BlackRock's investment awards in the bin), which show the offices daubed with graffiti ("Our planet your crime") and red paint thrown about to simulate blood.

Protesters left after around an hour, with apparent encouragement from the notoriously over-enthusiastic French riot police. BlackRock said it 'strongly condemned' the "violent intrusion" and that there have been attempts to "intimidate" employees in Paris for several weeks. The fund management firm, which has more than $6.8 trillion in assets under management, has long been criticized for its investments in fossil fuel companies and lack of support for sustainable investments. Last month it committed to add companies generating more than 25% of their revenues from thermal coal to its exclusion list in the next six months. However, the policy will only apply to BlackRock's active funds and Financial Times estimated that it impact just 0.007% of the group's holdings overall.

Separately, for anyone looking to build a career in less contentious investments, U.S. Venture Capital firms are arriving in Europe and are hiring. Sifted, a new media site run by the Financial Times, notes that Sequoia, the Silicon Valley venture capital firm, is opening an office in London and is looking for a partner to run its team. Andreessen Horowitz, Right Side Capital Management, Bessemer Venture Partners, Founders Fund and Greylock Partners are also making inroads in Europe, but don't have offices on the ground yet.

This time will hopefully different, but one observer wryly notes that this isn't the first occasion that U.S. VC funds have decided Europe is where it's at. - They came before, and then they left again. "There are always waves of this stuff happening," says a partner at one London VC firm.

Activists wrote tags such as “I want to live” or “Murderers” on the walls and blocked the entrance with ropes and rolling office cabinets before riot police arrived. (Reuters)

JPMorgan is under pressure to eject 81 year-old oil man Lee R. Raymond from its board. (Bloomberg)

Fabio Madar, the new head of FX sales at NatWest Markets is causing ripples after an email was sent to the corporate clients of JB Drax Honoré. The email said NatWest would no longer accept trades executed by Drax and asked them to share details of their FX trades with Madar himself instead. (Financial News)

Upset at HSBC ahead of the strategy change. Only 28% of employees in Europe say they are seeing a “positive impact” from the bank’s strategy. (Bloomberg)

Steve Ashley, head of Nomura's wholesale bank, was diagnosed with hyperactivity at a young age. He says he has an ability to absorb large amounts of information, seemingly as a result. (Financial News)

The British government wants the EU to sign up to a “permanent equivalence” regime for financial services that will last for “decades to come." It probably won't happen. (Financial Times)